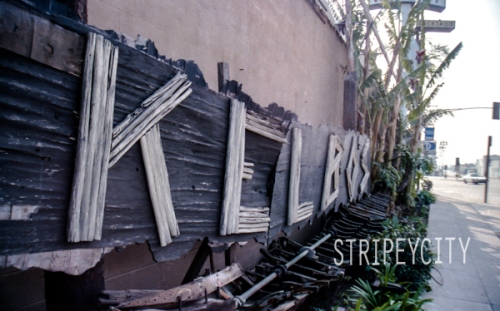 Digging through old negatives the other day, I came across a batch of scratchy, poorly preserved color negatives of Kelbo’s Restaurant. In the early 1980’s I moved into  a bungalow behind Kelbo’s in West Los Angeles. At that time, Kelbo’s was one of the last great post war tiki-style Polynesian restaurants left  in Los Angeles or perhaps the world. I recall seeing another Kelbo’s on Fairfax, across from Farmer’s Market, but that joint was demolished  a few days later, before I could snap a shot of it.

I had a sense that Kelbo’s wasn’t long for this world. There were never many folks inside drinking or eating  whereas the S.F. Saloon, LA’s first fern bar just a block away, was always hopping. 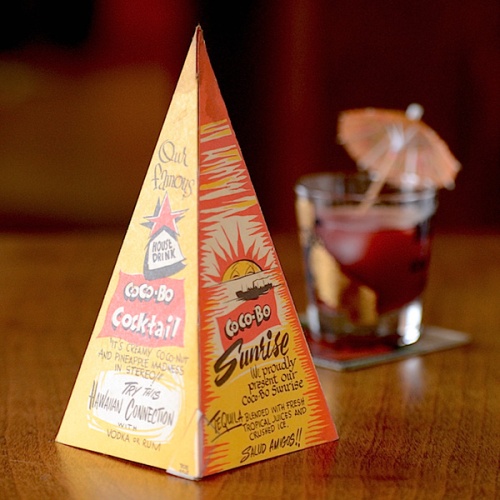 Through the haze of time and booze, this is what I recall of the inside of Kelbo’s: thatched booths wrapped in bambo with a dramatic back lite plastic cocktail menu at the far end displaying Kelbo’s signature tiki-inspired rum drinks in wondrous colors of green, purple, fiery red & blue; tropical fish tanks on the backside of the bar; bartenders dressed like modern day Trader Joe’s employees; greasy sugary ribs that people loved; a round dance floor in the back with spinning disco ball and a circle  on the ceiling resembling the edge of a half coconut.

Luckily I snapped some shots of the outside, otherwise I would have never recalled the odd murals were painted on the doors & stucco. A few years later, Kelbo’s was sold, stripped of its soul and turned into Fantasy Island, a strip club which is how the building continues to function today.  I imagine the strippers  dancing beneath that coconut shell, working on the same floor once inhabited by spry seniors cutting a rug. I’m certain the fish tanks & glowing menus are long buried deep in a landfill.

These murals were on the parking lot side of the building. They are painted in a film negative black & white look that some have found oddly racist looking.

A few of the doors, one a black & white negative of the other.

Who were the artists who created the murals? Not sure about the guys from Genius Inc but Carolyn Dulay is a graphic artist proud of her work at Kelbo’s.

Notice the integration of the restaurant’s electric panel into the tropical look.

The last stop on this tour is the junk shack in the back. Nothing of value inside folks so keep it moving! 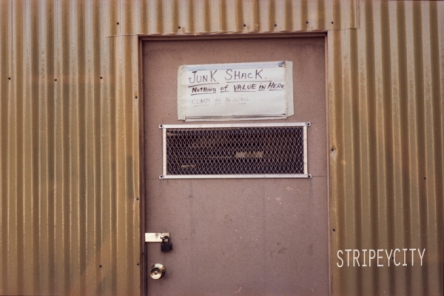