On a day full of photography you can bet that someone will yell at you.  People don’t want to be photographed even when you’re not photographing them.  Just the hint of a camera aimed in their general vicinity can trip the wire of a crazy person.  This happened years ago when me and a friend were walking down Pico near Papa Cristo’s.  We had cameras in hand, snapping shots of signs and the occasional interesting street drama.   Then we saw something that seemed better suited for an old cartoon: the Bobo Motel.  It’s an old motor inn with an arched driveway into a center court.  The words Bobo Motel were prominent, nicely titled and attracted our lenses like a magnet.  My friend got out in front and snapped a few choice shots but as  I raised my telephoto a loud, angry yell rang out that nearly cracked the glass in my lens.  The gist of the rant was that he had a shotgun and was ready to use it if we were daring enough to photograph his precious Bobo.  Damn.  I dropped my telephoto downward and marched away.  My friend had scattered in another direction and we met up down Pico somewheres to compare notes.  I was rattled and came away with nothing.  She was amused and later showed me several shots of the Bobo that I wished I had been brave enough to call my own. 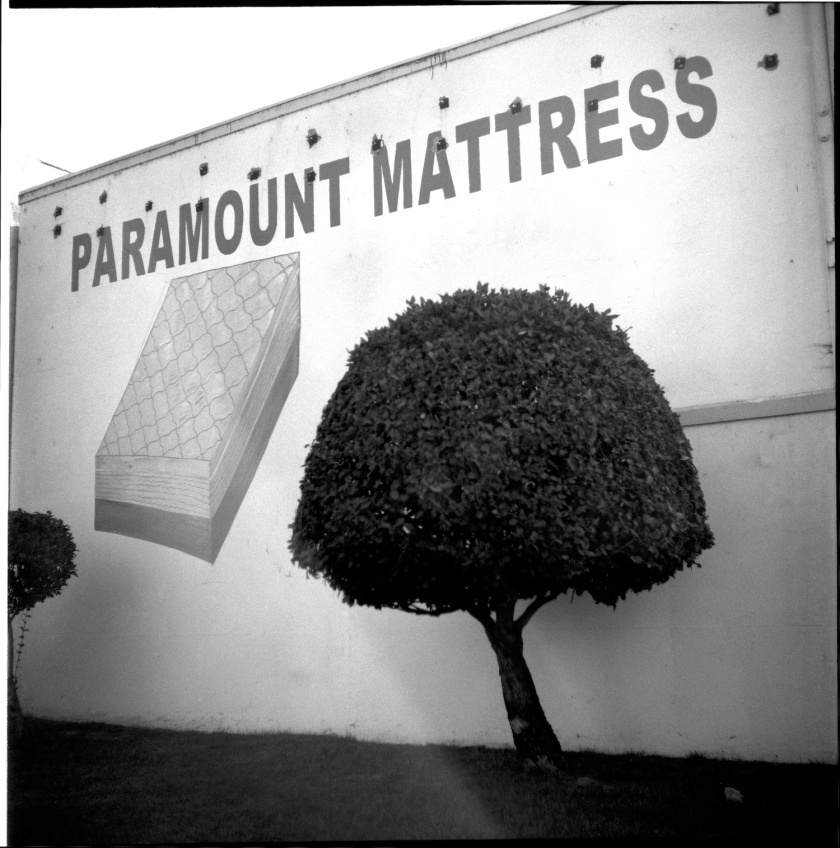 Several years later there was a similar incident.  This time it was east LA on Olympic near Soto, a street with comic book murals on the sides of bars & photogenic signage of every description.  It had been a colorful walk with lenses when the Paramount Mattress company building appeared.  What struck me about Paramount was the bold type face and square cut mattress that looked more like a slab of cheese than something you’d wanna sleep on.  I had my 2 1/4 and it took some adjusting to find the right angle to balance type face, cheese cut mattress and manicured tree. As soon as I tripped the shutter I heard the angry attack of a crazy person.  As I recall he actually stormed out of the building with overblown ire like I had insulted his family, mocked his lineage and spat on his mother’s grave with my shutter.  I tried for a moment to reason with him, to explain my reasons for photography and my interest in the side of building, thinking I was being complimentary, but I just incited more threats.  There was nothing else to do but skulk away like a simpering coward.  Later I found this shot when I developed the film in the camera.